On this page, you can compare differences from the base scenario you selected in the Scenario Selection dialog in further detail.

The nodes in the maps are colored based on changes in cost that you may consider significant. The threshold for what is significant is set on this side panel.

The default is 1%, however, the most useful value may be higher or lower depending on the situation.

This map compares the Resources used between the selected scenarios. Resources can be DCs or Production Facilities. (These scenarios can be selected on the Selection Side Panel.) 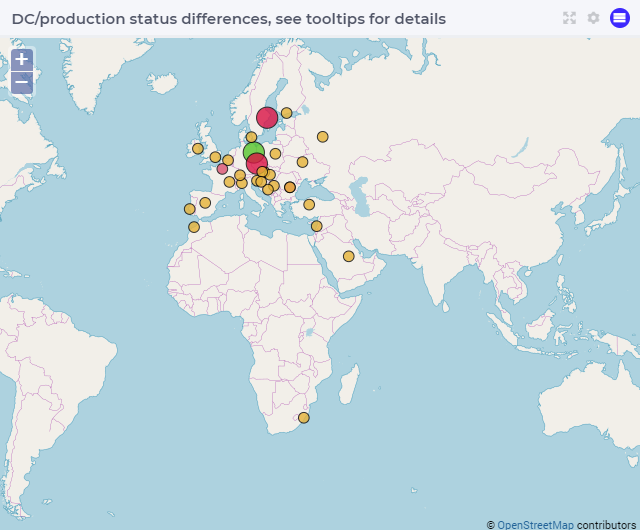 Hover on a node to see details about the differences including both the node and scenario names.

A node is red if this location is open in the base scenario and closed in the compared scenario.

The Resource location nodes in the default color are the same in both scenarios.

In this map, the demand locations indicate changes in this cost per unit between the selected scenarios. You can see the breakdown of this cost for specific locations on the page Cost to Serve Report. 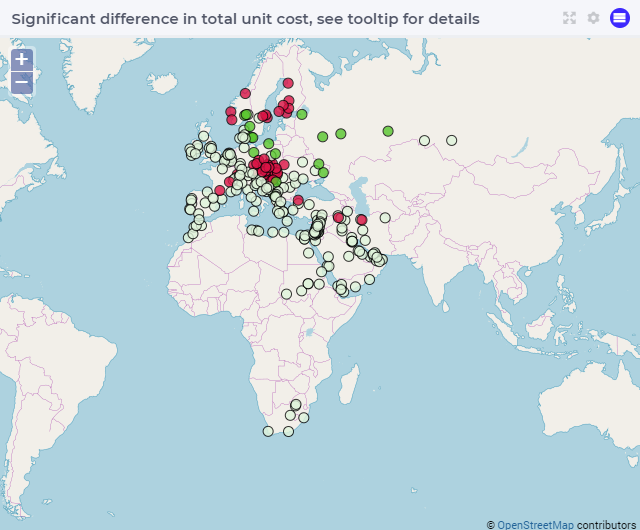 A node is colored red if the cost at that location in the compared scenario is significantly higher than in the base scenario.

A node is colored dark green if the cost at that location in the compared scenario is significantly lower than in the base scenario.

The Demand location nodes in the default color are the same in both scenarios.

The amount of difference is determined by the “Different Threshold” also on the Selection Side Panel.

Hover on the nodes to view more details about the difference between scenarios. For example, hovering over a dark green node may show these details:

The table shows more details about the cost differences.

You can toggle between viewing the data for all locations vs. just the selected location in the

action menu in the top right corner. When viewing data for the selected location you can easily compare details about the types of costs that impact the differences:

This table is similar to the table in Cost difference, but now for DC Throughput and Production Volume